You may have heard of Change.org. It’s a popular online petitioning platform. You may have even noticed there can many online petitions about popular topics. For instance, it is easy to find dozens of petitions protesting the Lychee and Dog Meat Festival with varying levels of support. 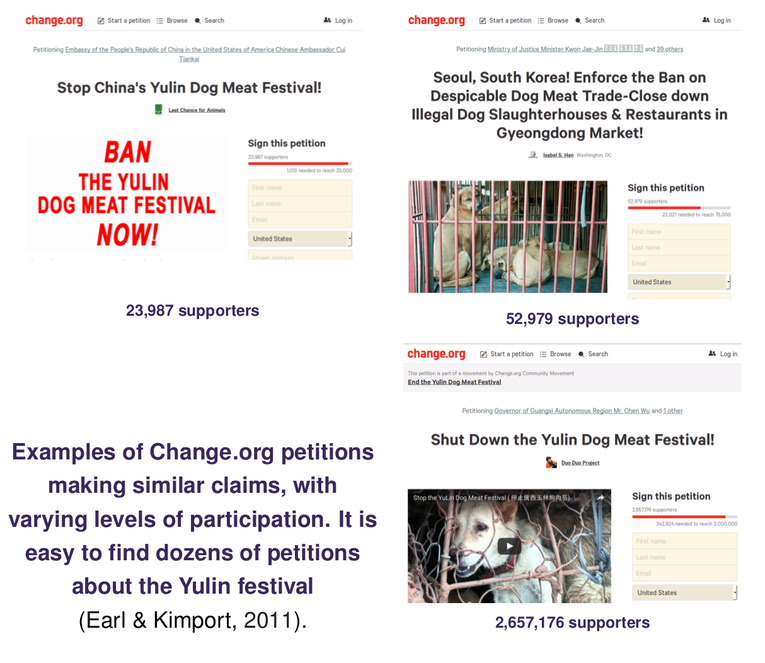 Imagine you want to start an online petition. You might worry if your petition is very similar to other people’s petitions that already have signatures. These other petitions have a head start and will get all the attention. That said, if nobody has made any similar petitions, maybe that’s because the issue you are petitioning about doesn’t yet have a lot of popular support. You might also worry if your petition is unusual. Which of these two worries (making a duplicate petition and making a petition no one cares about) should concern you, dear petition creator? In my research, I set out to answer this question. The project is still in progress. I recently presented it as a poster at CSCW ’17.

Sociologists of organizational ecology considered similar questions about businesses and social movement organizations. They wanted to explain why organizations were more likely to die when an industry was young or old, but less likely to die in between. They argued that density, or the number of organizations in the population, was tied both to processes of legitimation and competition. There aren’t many firms in unproven industries because it’s not clear the industry will succeed, but when an industry is mature it becomes competitive. Everybody wants a piece of the pie, but you might not get enough pie to survive! This notion is called density dependence theory.

I think it is intuitive to apply this logic to online petitions and topics. If you make a petition about a low-density topic, chances for success should be lower because the petition is more likely to be unusual or illegitimate. However if you make a petition in a high-density topic, now you have to worry about competition with all the other petitions in the topic. You want your petition to be original, but not weird!

To collect data to test this theory, I downloaded a large set of petitions from Change.org, spam filtered them, and removed very short ones. Next I used LDA topic modeling to group petitions into topics. This makes it possible to assign petitions to points in a topic space. The more crowded this part of topic space, the denser the petition’s environment.

Finally, I used a regression model to predict petition signature counts. Since density dependence theory predicts that the relationship between density and signature count is shaped like an upside-down U, I included a quadratic term for density. The plot below shows that observed relationship between density in topic space and signature count is what the theory predicted. The darkness of the lines at the bottom of the plot show that most petitions are in less dense parts of topic space.  So you, dear petition creator, should worry about competition and legitimacy, but worry about legitimacy first!

I’m excited by this result because it shows interesting similarities between efforts to organize coordinated activism online and traditional organizations like firms. I’m planning to apply this method to other forms of online coordination like wikis and online communities. 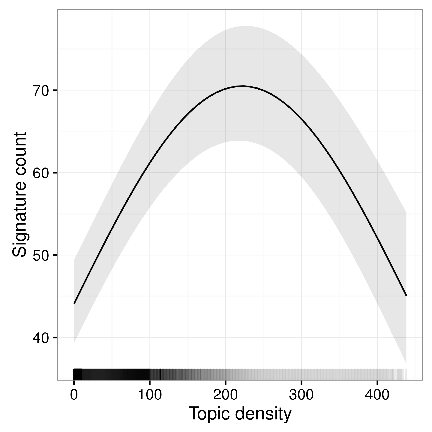 This blog-post and the work it describes is a collaborative project between Nate TeBlunthuis, Benjamin Mako Hill and Aaron Shaw. We are still at work writing this project up as a research article. The work has been supported by the US National Science Foundation